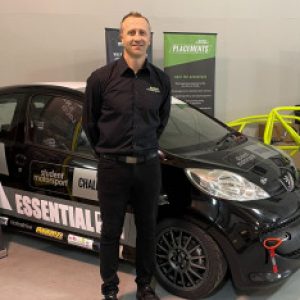 Do this as a priority, your ECU needs to posted and reprogrammed by Hybrid Tune so don’t delay.

When removed (using a permanent marker) write your name, car make and race number (if you have one) onto the back of the ECU. See this link for full instructions and details https://citycarcup.co.uk/ecu-instructions/

Step 2. Remove the top of the fuse box (lid) to gain better access and view of the ECU, then locate and remove the upper right and lower left bolts holding the fuse box in place for any given period.

Step 3. Prise the plastic securing clip as illustrated on the bottom right and lift the fuse box up and to the right. The fuse box will not move very much as it is still connected to the wiring loom, but this will give you better access to the ECU mounting frame located behind.

Step 4. This now reveals the ECU, note the cable ties securing the ECU harness connectors in place, remove these carefully with wire cutters. Now use a small screwdriver to pull/prise outwards the connected security clips on either side as illustrated.

Step 5. Remove the ECU wiring harness connections by lifting them carefully from the ECU.

Step 6. Having disconnected the ECU wiring harness conenctions you are now able to remove the 4 ECU mount bolts.

Please confirm you want to block this member.

You will no longer be able to:

Please note: This action will also remove this member from your connections and send a report to the site admin. Please allow a few minutes for this process to complete.

You have already reported this
Clear Clear All